Bjelasnica  is a mountain  situated in the midle part of Bosnia and Herzegovina,  which is by Jahorina, Vlasic, Kupres and Blidinje one of the leading ski centres in the country.

Bjelasnica is the highest ski centre in Bosnia and Herzegovina (the highest mountain is Maglic with an altitude of 2386 meters).

In Bjelasnica were construct many sports and touristic infrastructure, back in 1984 when in Sarajevo where the 14th Winter olympic games, which are still in use today.

The Ski Centre has 8.345 meter of ski paths for all olympic disciplines. The ski paths starts at an altitude of 2.067 meters to an altitude of 1.266 meters where was the finish line back in 1984.

The cableways that are in use are: three ski lifts and two cableways with two and three seats.

Bjelasnica is situated south-west of Sarajevo and like as it neighbour Jahorina, it belongs to the highland area of  Dinarides.

On the highest point of the mountain (at an altitude of 2067 meters) there is a meteorological station,  which is the highest inhabitat point in Bosnia and Herzegovina.

The relief is karstic and  glacial. In summers the mountain is coverd by dense green grass and in winters with 3 meters higs snow.

The average year temeperature is just 0,7 0C . The highest is 24 0C and the lowest is -41 0C.The climate characteristics of these region are strong winds and thunders.

The accommodation offer in Bjelasnica is varied. The most knowned is the Hotel Marsal  like as private accommodations in which are offered rooms and apartments. 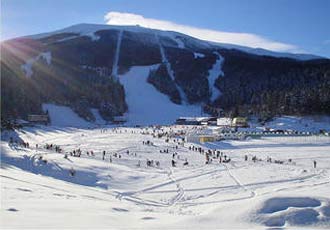