In the south dalamatian archipelago, paralell to an esat part of the peninsula of Pelješac is situated the most southern and more eastern of the Croatian largest islands - Mljet.

The island of Mljet is 37 km long and has an avarage amplitude of 3km. The oldest sources in which is mentioned the island of Mljet, under the name of Melita (Melite), are bounded to a Greek history. Among many Greek writers namely, at the beginning of the IV.century B.C., is mentioned the name of Mljet. Even the Homer's story of the Itaka's king Ulysses is connected to the island of Mljet. The story tell's that after the shipwreck, Ulysses swam till the nearest island on which he found a shelter in a cave where later the nymph Clipso trapped him. It's considerated that the island in question was Mljet. After the Greeks, Mljet recives it's first permanent habitants the Iliryans, who came from the Peljesac peninsula and the valley of Neretva. From that period are conserved many historic and cultural monuments (emblems, forts), while from the Roman empire are conserved the amphoras founded in many wracks in the Mljet's archipelago.

Mljet is rich with forests and is not strange the fact that it is called the green island. It's woods, the rich fauna, the crystal clear and clean sea and the sandy and gravel beaches make it a very attractive turist destination, especially for one-day trips. It was just the extreem natural beauty of Mljet that contributed to a fact that it's north west part in 1960. was declared a National Park. On the area of the National park are spread two deep bays, which for their tight passes to an open sea are called lakes. Along the lake coast is located a 12 km long promenade, while the nearest hills are offering many possibilities for hiking lovers. On the litle island in the middle of the Big lake is situated the cultural and historic pearl of all the island - the convent with the Curch of the Virgin Mary, the Lady of the lake dating from the XII century.

To it's guests the hosts will offer the known goat cheese, the honey, various sea fruits and the vine. The accomodation is available in the Hotel Odisej and in many private accomodation.

Come to Mljet, enjoy in the untouched nature, travel trought the history, relax and rest a while from the daily streess accopained by the smell of the pine woods and the rumour of the waves. 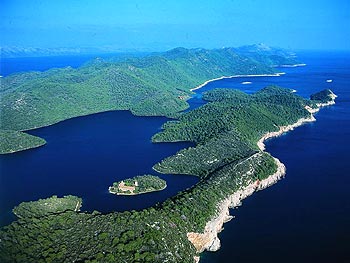 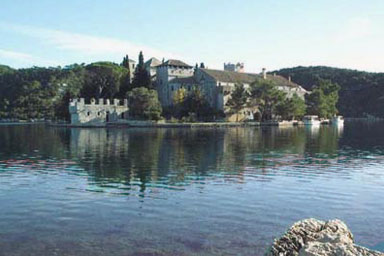 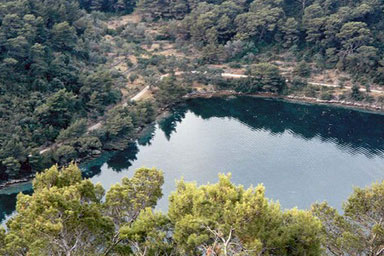 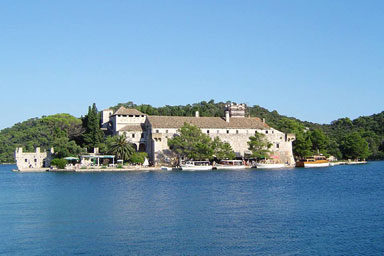